The Harvard University Science Center, the largest building ever built for the university at the time of its completion, comprises nine stories, plus a basement and observatory floor, and is sited at the meeting point of a number of pedestrian paths that connect Harvard's north and south Cambridge campuses. These paths are continued into the building in the form of a glass-roofed, brick-paved arcade. The building's major public functions open off this arcade, including (at one time) the 200,000-volume Cabot Science Library, four lecture halls seating a total of 1, 200, and centralized food concession area with an adjacent landscaped courtyard.

The Science Center contains fully-equipped laboratories for physics, chemistry, biology, geology, and astronomy, and office wings for the departments of Mathematics, Statistics, and History of Science. Other academic amenities include Media and Technology Services, the bustling Natural Sciences Lecture Demonstrations office, the Language Center, and the offices and exhibition galleries for Harvard's Collection of Historical Scientific Instruments. The building also includes five large lecture halls seating between 132 and 500, 16 smaller general-use classrooms, rooftop astronomical observatory with large telescopes, and faculty and staff offices.

Chilled water facilities in the basement and on the roof of the building supply chilled water and electrical power distribution for the entire north campus.

The Science Center was built in 1972 and opened in 1973 after a design by Josep Lluís Sert (then dean of the Harvard Graduate School of Design). The Science Center cost $17 million, plus $6 million for the chilled water plant. For more information on the history of the building see the History page on this website.

The plaza between the Science Center and Harvard Yard, created by the depression of Cambridge Street and Broadway, is used at various times for food trucks, roller skating, ice skating, and other activities such as markets and concerts. Tents are erected for special events such as Commencement. An installation of large boulders and landscaping operates as a fountain during good weather. For information regarding events on the plaza visit the website for Common Spaces. 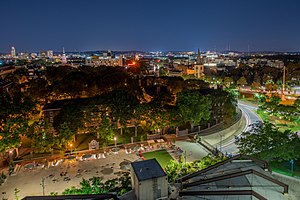 The Plaza seen from the Science Center